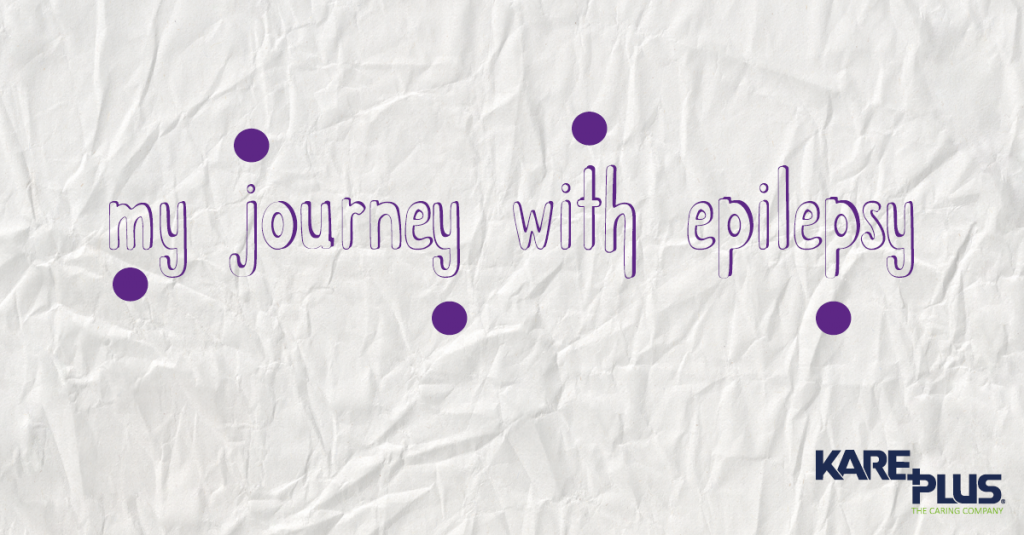 My journey with epilepsy

Epilepsy conjures up many mental images, often quite scary ones; typically, the convulsing, rhythmic jerking movement of limbs, sometimes frothing at the mouth and an awful gurgling rattle noise, all from an individual who seems possessed.

I remember being told a girl had epilepsy at my school when I was about eight and feeling very fearful of what I should do if she were to have a ‘fit’. We were not told what to do, merely made aware of her condition and the symptoms. I never anticipated, that one day, my life would become incredibly challenged by epilepsy.

I wanted to tell our story merely to try to break the stigma, that people living with epilepsy are people, just like you and me, trying to live a normal life. It’s just that they have electrical brainstorms which are a real inconvenience, to say the least…

At around 8.30am one sunny July morning I woke at a friend’s house to hear some unusual noises coming from my 10-year-old daughter, who was sleeping on a guest bed next to me. Peering over I recognised immediately that my she was having some kind of ‘fit’.  Unsure on the appropriate course of action, I scooped her up into my arms and screamed for my friend to call an ambulance. She convulsed for what felt like forever but was about three minutes and when it stopped, she was unresponsive for several minutes. She eventually came to but the whole experience left her exhausted and sleepy, something she would become accustomed to going forward. The ambulance came, the paramedics checked her over, made sure she was ok and advised us to see our doctor as soon as possible. And so, our life journey with epilepsy began.

Scared it would happen again, I moved into my daughters’ room to monitor her.

The second notable seizures happened a week later while we were away again on a short break in Wales. Again, the first seizure was in the early hours of the morning, then she had two more in the same morning; we eventually called the ambulance as the last seizure lasted closer to four minutes - the paramedics recommended we contact our GP immediately.

The GP was concerned about ‘status epilepticus,’ a dangerous condition in which epileptic fits follow one another without recovery of consciousness between them. We abandoned our holiday, and the GP arranged a visit to the epilepsy department at our local hospital as an emergency case.

The consultant suspected my daughter had a form of Focal (‘Rolandic Benign’) Epilepsy, which is one of the most common forms of epilepsy in children: 9 out of 10 children grow out of it by the age of 14-16. My daughter exhibited classic symptoms of this type of epilepsy in the following form:

The tonic-clonic seizure is what most people think of when they think of a convulsive seizure. When it happened to my daughter, she;

These types of seizures usually lasted one to three minutes. If a seizure was to last more than give minutes, then an ambulance should be called. These seizures rendered her exhausted for up to 4 hours.

It was almost a relief to get the Benign Rolandic epilepsy diagnosis and as parents, we kind of pinned our hopes on the fact that she had begun her seizures in childhood and anticipated she would eventually grow out of it.

We got a clear MRI scan, and she had 18 months seizure free. If she had reached 24 months, we could have begun weaning her of the medication, to see if her epilepsy had gone. Unfortunately, this was not the case.

Our epilepsy journey turned into a nightmare.

The seizures started again; her Tegritol medication stopped working, so we tried another called Lamotrigine. While this stopped the full seizures, it did not stop the partial seizures and by May 2016, she was having up to 17 partial seizures a night. It was like having a newborn baby again. We’d been through so much and were all incredibly tired, but I was so proud of my daughter. Through everything she carried on as normal with minimal complaints, she even managed to maintain a 95% attendance record at school. As a family, we were determined not to let the condition affect her life negatively.

With the Lamotrigine failing we tried another medication called Keppra. This failed on all accounts and not only did it not prevent seizures it gave her ‘Keppra rage’, turning my sunny little girl into an aggressive, depressed a suicidal 12-year-old. Following countless attacks on her placid little brother, we fought to have this drug removed as quickly as possible and so we began a combination of Clobazam and Lamotrigine.

She was seizure free for about six weeks and then, the seizures began again…

It was clear that as she was medication resistant- that there was a problem. Following EEGs and further MRI scans, we were referred to the Birmingham Children’s Hospital.

In the interim of awaiting appointments, we took the difficult decision to look into CBD oil as a potential cure. There was so much positive information with regards to this so-called wonder drug and yes, it did work, just like the other medications had, but yet again, following a honeymoon period, her brain activity prevailed over the medication after 6 weeks. A familiar crushing pattern which we were becoming used to.

Following a video telemetry at the Birmingham Children’s hospital, a procedure which simultaneously measured her brain activity (EEG), while videoing her for four days, A PET scan at St. Thomas Moore in London and a Functional MRI at Aston Brain centre. The consultant delivered the crushing news that it was highly unlikely that she would grow out of her epilepsy.

They had however, identified roughly the area in her brain which was causing the seizures and wanted to take the testing further:

A Stereo EEG: the practice of recording EEG signals via depth electrodes (thin hair like probes with sensor nodes placed along the needle), surgically implanted into the brain tissue. The probes are left in the brain and wires are attached to them and the patient is monitored for up to eight days. Well, you can imagine my response to learning that she was receiving this kind of invasive brain procedure, one commonly reserved for only the most complicated of epilepsy cases. The Birmingham Children’s Hospital only does two a month. I must admit, this caused a bit of a melt down on my part. We duly cracked on; we had no choice.

In April this year, the time came for us to go to hospital for the SEEG procedure, a procedure we were all nervous about. The most harrowing part for me, was not her being put under anaesthetic and being wheeled into surgery to have the probes implanted (although this was not good), but actually it was when the neurophysiologist plugged a laptop into the wires which extended from her brain probes. There were 13 probes in her head with a total of 166 sensors. The sensors were in pairs, and after two nights of monitored seizure activity, they were able to identify 43 pairs of sensors which were placed in areas with highest potential to be the section of the brain which cause the seizures. To narrow this down, they test the areas identified by passing a small current to the sensors starting with those which are least likely to cause seizures and work the test progression up to the areas which are most likely to be the ‘knot’ in the brain which causes seizures. If the area is sensitive, then it is highly likely that a seizure will be induced.

They began the testing and after a while My daughter began to experience strange sensations in her arm. The neurophysiologists were getting close to the top of the sensor list when my daughter screamed while holding a clawed hand up saying, “I can undo my hand!”, her arm shot back behind her head and she went into a full and very violent seizure.  My harrowed initial reaction was to shout at the staff. “Make it stop!”, the nurses prepared anticonvulsant medication, but at 4 ½ minutes the neurophysiologists said that the brain patterns had changed; she was bringing herself out of the seizure, luckily the anticonvulsants were not needed.

The neurophysiologists solemly informed us that they had identified a key area, but the catch was that they still had four more pairs of sensors to test, which they were going to do the following morning. Would they make her seizure again? We were both so worried as the seizure she had was so vicious. It had taken her three hours to recover from and we were both so weary from broken, sleepless nights on the hospital ward.  I was sleeping in a cot bed next to hers and while not ideal for me, I would have never considered leaving her.

So, the following morning, we waited while the neuros set up. They began the testing and with trepidation held my daughter hand. I am pleased to report that the only event was a really odd taste in her mouth and a slight partial seizure.

We had to wait two further days for the probes to be removed. During these two days and the full six days we were there we met other parents and children who were going through similar experiences to us. Knowing we weren’t alone meant a lot to us; we were able to support one another as we collectively went through a time of distress.

My daughter left the hospital with a fully bandaged head. Two days later we removed the bandages to reveal a very dodgy half shaved head. However, she rocked the look and we have been able to experiment with new edgy hairstyles, something which she may have never done. She has now graduated to a half bob which I think is a combination of the Marvel superheroine, Black Widow played by Scarlett Johansson and pop star Rhianna.

Today is the 20th of May and we have not yet had the results. However, the multi-disciplinary team met to discuss my daughter's case today.

We are waiting to see if they can operate on the area, so that my beautiful, strong, determined daughter has the potential to be free from epilepsy without having to take a cocktail of four medications. I hope her memory and ability to focus can be stabilized, and she can one day live independently without being monitored and realise her dream of driving.

If they cannot, then I think we will be exploring the possibility of a Vagus nerve stimulator implanted inside the body, to the left Vagus nerve in the neck. It is hooked up to a stimulator (or 'pulse generator') which sends regular, mild electrical stimulations through this nerve to help calm down the irregular electrical brain activity that leads to seizures.

We are a naturally optimistic family. There are many people who have varying challenges in their lives, some far worse than our situation. Of course, as a mother I would take the epilepsy from her in a heartbeat if that was an option but in the real world, we must put our faith in the amazing professionals at Birmingham Children’s hospital.

We hope and pray that the condition, which apart from attending the odd sleep over because of parents not knowing how to deal with a nocturnal epileptic, has not stopped her achieving everything in life.

She may have epilepsy, but epilepsy doesn't have her…

When we know the results of the Stereo EEG, we will release a further article