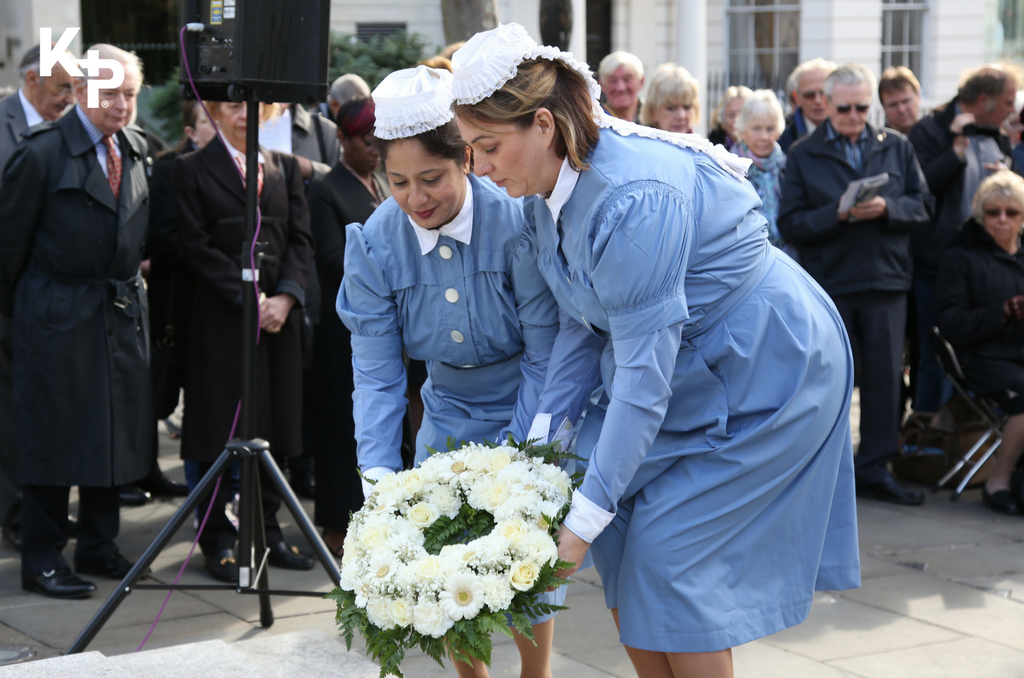 101 years after Edith Cavell’s execution for assisting the enemy, many nurses, war veterans and the general public from around the world still gather at her statue annually near Trafalgar Square, London to commemorate her life and work.

This year, as new charity partners of Cavell Nurses’ Trust, Kare Plus attended the event to show not only our respect to Edith Cavell, but also our support to the outstanding work Cavell Nurses’ Trust does in her name to support current and retired nurses, midwives and HCAs.

In what was the fifth year Cavell Nurses' Trust has taken over organisation of the commemorative event, the day began at 10:30 with an inspirational speech from Cavell’s Chairman, Simon Knighton. Following this, numerous attendees then had the opportunity to lay a wreath in memory of Edith Cavell; some of who included The American Red Cross, Royal British Legion Women’s Section, Westminster and The Royal London Hospital to name a few.

Every year since 1920, The Royal London Hospital, where Edith Cavell was originally trained as a nurse, has visited the site on 12th October: “This statue was put up in 1920, and it was decided by the then Matron at the London Hospital, that it would be a good idea if two sisters came to lay a wreath every year on the day she was executed, and we have absolutely done this every year", explained Royal London Hospital Matron, Tosh Denholm.

"For many, many years it was just two Sisters or Senior Nurses, somebody who was organising it and a wreath, so for many years there was no ceremony. Then about 10 years ago I got a call from the Belguim embassy and the Belguim Ambassador was very interested in what we did and wanted to come along.

Now, Cavell's Trust is marvellous, they do most the organisising and we just come along, lay our wreath and join in - which is what we as nurses do to remember Edith."

Despite not being as large an event as last year’s 100-year celebration, there were still over 50 healthcare professionals (both current and retired), charity-partner representatives and Cavell Nurses’ Trust beneficiaries and attendees. One stand out attendee however was 94-year-old, Raissa Baker, who trained at Edith Cavell's Nursing School in Belgium, aged just 17, in 1939.

After anecdotes were shared, a minutes silence was held and respects were paid, Cavell Nurses’ Trust’s CEO, John Orchard took to the stage to share the latest from the charity’s 1700 successfully supported nurses, carers and midwives in the last 12 months.

Although this is a very impressive figure, new research undertaken by the Trust is set to be announced in the coming weeks, highlighting some shocking statistics about the wellbeing of healthcare staff across the UK and how much more need to be done. Just one statistic alone highlights 1 in 7 nurses has had to miss a meal in the last 12 months due to finances – that’s 95,000 nurses who, at some point, have not been able to afford to eat.

With all this in mind, Kare Plus was not only proud to show its support today, but is proud to offer on going support to Cavell Nurses’ Trust and the work that it does for our nurses, midwives and carers – the people that look after you and I. This year we have set ourselves a target of £10,000 to raise for the charity; a figure which, in all reality, we want to obliterate.

After announcing our new charity partnership with the Trust just last week, a number of our branches and staff are already putting their names down to jump out of planes to help raise money, and many, many more initiatives and activities will take place over the next 12 months in the same vein.

For now though, if you want to learn more about Edith Cavell or Cavell Nurses’ Trust, you can visit the website here. You can also show your support by sharing a #LoveToNurse message on social media or by donating to the fantastic cause on our Just Giving page.

Best of all though? Ever single pound that you donate will be doubled by a fantastic Trust Fund left to the Cavell Nurses' Trust. So now’s the time to get donating. If you’re a nurse, midwife or carer, you never know when Cavell Nurses Trust could be there for you, and if you’re a member of the public, you never know when a nurse, midwife or carer will be there you.